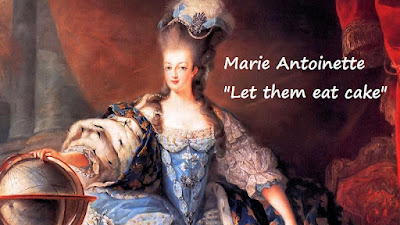 The infamous quote "Let them eat cake" is attributed to Queen Marie Antoinette of France although there exists no evidence that she actually uttered those words. It was most certainly black flag propaganda at the turn of the 18th century, when France was experiencing economic hardship. The quote hit a nerve as the poor at the time did not eat cake. It displayed the nobility's apathy and total lack of understanding the plight of the marginalised. This contributed to the frenzy of the hatred for the noble class by the disenfranchised and alienated French poor, fueling the fire to the burning cry for Liberte.

Top on the list is Hillary Clinton's "Basket of deplorables". Typical of the upper crust that leads the progressive ideological left, Hillary is all about power and control. Socialist idealism is a facade. It is a great tragedy that youngsters today incline toward the virtue signals of people like Hillary, and hold revisionist views of leftist philosopher greats of the past such as Karl Marx, Che Guevara, Jean Rousseau, blissfully unaware that these were racist, misogynistic, and contemptuous of the poor. Hillary hold Trump voters in utter contempt as 'deplorables', oblivious to the fact that these are millions of blue collar workers who produce the energy, food and other necessities of creature needs.

Lee Kuan Yew's old pal Henry Kissinger, is another good illustration. In the book The Final Days, Kissinger was quoted calling the elderlies "the useless eaters", a term he referred to people who are past the age of economic contribution to society. Quite clearly, the sick, the handicapped un-employables, the low-lifes in society, are within this category.

When it comes to such contemptuous Freudian slips, our local upper crust elites have proven themselves to be just as colourful. Let's revel in some of these.

First to come to mind is the 2016 pornographic quote "You need a very small space to have sex” from Josephine Teo, Senior Minister of State at the time. As head of National Population and Talent Division, progeneration was her portfolio. The context was the long queue for a government built HDB apartment. There is a priority scheme for married couples but it is conditional on them having a child. It is a chicken and egg issue which does not help those planning a family. The minister suggested to qualify for the scheme, couples can always have less discreet ways of producing the babies first, which can be accomplished in a small space. It is not a matter of non-resolution of the specific issue, but the manner it was brushed aside.

And who can forget the one time CEO of SMRT, m/s Saw Phiak Hwa, whose answer at an ambush interview to a question on large crowds at the train stations where she famously retorted "People can board the train - it is whether they choose to". Of course when such an utterance returns to bite, she put it off as taken out of context. No matter, the take-it-or-leave-it attitude betrayed an apathy that is simply indefensible. It did'nt help when photos appeared of a Mercedes, a Ferrari, and a Spyder motorbike at her carpark. She explained off that, as a spinster, she has every right to splash her close to $2m salary on herself. Elites don't understand the masses do not have choices of transportation like her.

PM Lee Hsien Loong's unquotable quote "mee siam mai hum" in 2006 went viral locally. He was innocently trying to poke fun at one of Mr Brown's parody podcast. In American lingo, he tried to display street cred (to have credibility and acceptability by the people on the streets). He was asking for a local dish sans cockles when this has never ever come with the mollusc. "Mee siam" is a traditional simple dish that Singaporeans slurp up at side-street corner foodstalls. It may well have been a Freudian slip, but most see it as a betrayal of complete detachment from the lives of ordinary folks by the exalted one.

In 2004 the National Kidney Foundation sued the Straits Times for defamation in an article which suggested mis-use of charity funds. The suit collapsed and backfired as massive abuses were revealed - first class air travels, gold-plated faucets, and an astounding S$600,000 paycheck for CEO T.T. Durai, a huge sum in those days, and even for today. As public outcry ensued, the wife of then Prime Minister Mr Goh Chok Tong, stepped into the fray. In defence of the CEO, who happens to be a friend, Mrs Goh defiantly said "S$600,000 a year is peanuts". In late 1990s, Lee Kuan Yew implemented a world-unique ministerial pay scheme pegged to certain top jobs in the private sector. It had the dual objective of equitable compensation to attract top talent and dis-incentivise corruption. In the run up debates on ministerial salaries, Lee had often stressed it is not right to pay peanuts to ministers whose responsibilities far outweigh executives in the private sector. Somehow, Lee's "peanuts" had a wisp of wisdom. But coming from Mrs Goh, it sounded plastic, an abject condescension from the high and mighty which probably sits at the top of the totem pole of what rankles the ordinary Singaporeans to this day.

In 2013 Minister Khaw Boon Wan said "Smaller Medisave means you're lazy and save less". Yes, Minister. we all know the aunties and uncles working as cleaners at the food court will never, in their live-time, accumulate Medisave balances what you do in 3 months. But we know they work 12 hours a day and oh yes, their pittance contribution to Medisave collectively helped in some way to pay for your heart by-pass treatment which cost you only S$8 in cash personally. With no minimum wage, the elites have no idea the poor are scraping the bottom of the barrel.

"If you can't afford chicken, you can always eat fish" came from our very own President Halimah Yacob. At the personal level, I think she is a fine lady. But surely it is difficult to differentiate the president's quote from the queen's "if the people cannot eat bread, let them eat cake".

Such disparaging and contemptuous remarks, unfortunately, are'nt exhaustive. I could continue, example "How much do you want? Do you want 3 meals in a hawker center, food court or restaurant?" from Minister Vivian B, or "Everybody has a car. We have two -- we are professionals, we need to travel" by defeated PAP candidate Kok PK. Or the unkindest cut from President Tony Tan to ex-Minister of State for Education the good Dr Tay Eng Soon, not to waste money on the "lost causes", those low achievers in the Technical Training Institutes. The streets of tree-line elitist conclaves are littered with such derogatory apathetic stones thrown at the poor.

Our times are'nt very different from the French Revolution - economic uncertainties, rising costs, resource shortages, disappearing jobs, big government, a shrinking middle class. All leading to a growing angst against those that governs and those that monopolises wealth. History has shown that the display of contempt by the upper crust elitist aristocratic, the bourgeoisie class, on the proletariat worker class, did'nt end well for them in the 1790s as the French Revolution went into its excesses.

In reality, the quote in original French was “Qu’ils mangent de la brioche” which means "Let them eat brioche". For tax purposes at the time, there were 4 categories of bread. The cheapest basic bread was called the 'le pain paysan' ('pain' is bread in French, pronounced as 'pan'). The next tier is called 'brioche de marchand'. Brioche is made with eggs and butter. To protect the poor, the basic bread was subsidised at regulated price. With pegged prices lower then production cost, bakeries dropped this product and sold only the next 3 tiers of bread. As basic bread disappeared from shelves, the queen suggested people eat the next cheapest bread, the brioche. Marie Antoinette was simply in sync with liberal demands for free enterprise and less government market intervention.

If Marie Antoinette did in fact utter that quote, then the French Revolution could well have chopped off the head of a queen who shared the same liberal ideologies as the baying crowd on 16 Oct 1793 at the place known today as Place de la Concorde. A most cruel irony for the queen to end up on the guillotine.

The lesson for the day is avoid callous "let the people eat cake" kind of statements. Whilst it may be manifestly reasonable to ask people to eat market-priced cakes, it is more palatable if the message comes with more empathy.