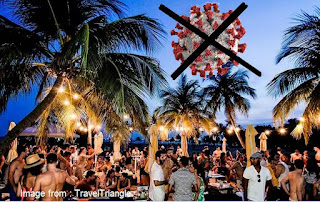 My compilation of the index is based on the conditional probability of the chance of contracting Covid-19 and dying from the infection. The metric is derived from the product of the percentage of cases to population and the percentage of death to number of cases.

The status is dynamic. The data here is as at 5 Sep 2021. The data integrity may be an issue as the pandemic has been politicised in some countries, particularly the US.

The index below is on ranking basis - the safest country with the lowest probability of death from coronavirus is ranked high. and dangerous countries are ranked low.

A few significant points worth noting:

1. China has not used mRNA vaccines from Pfizer or Moderna, nor Johnsons & Johnson's DNA vaccines. China is testing its own mRNA. It has achieved 62% vaccination using inactivated virus vaccines. Could non-use of mRNA vaccines account for China's high ranking?

2. In terms of numbers of deaths, US (ranked 202) is highest at 665,858 (1.63339 %). UK (ranked 198) has 8th highest deaths of 133,229 (1.90924 %). Majority of the dead are from the older generation. But this does not compare well to Japan (ranked 81) which has only 16,313 dead (1.04774 %) when it has a demographic of highest old people. In UK, a scandal is being investigated for the excessive use of Midazolam, which is a sedative used to assist the old folks having intubation. Midazolam causes respiratory problems which exacerbated the old folks under intubation, possibly contributing to their death. In US, Remdisivir is used in the treatment protocol. Remdisivir causes liquid retention. When it impacts the lungs, it causes neumonia which probably contributes to the deaths of the older patients. In any case, the US data for Covid deaths are questionable in light of the fact the annual hundreds of thousands of death from common flu has mysteriously vanished.

3. If is very clear there is no significant correlation between the level of vaccination and cases.

4. One surprising thing that jumps out from the index is many African states have low cases even though they have poor health institutions and vaccination rate is low. Since 1995 these countries have been using Ivermectin to treat parasitic and viral diseases in The African Programme for Onchocerciasis Control (APOC). A study was conducted in 2020 on the significance of use of ivermectin to low Covid incidence in Africa. (Read full details here) The study found : "The incidence in mortality rates and number of cases is significantly lower among the APOC countries compared to non-APOC countries. That a mass public health preventive campaign against COVID-19 may have taken place, inadvertently, in some African countries with massive community ivermectin use is an attractive hypothesis. Additional studies are needed to confirm it."

Shout out : The Safe Country Index screams out mRNA vaccines are not working; Ivermectin is the wonder cure. All governments in the world are in denial. It is really excruciatingly impossible to understand why. At least, and at long last, very recently Japan has said to hell with all these vaccines. Africa is showing Ivermectin makes a whole lot of sense. Japan is switching to using Ivermectin in their treatment protocol.

(Apologies for the long image. I don't know how to create a scrollable excel and insert it in webpage)

See related blogs:
Open Letter To MTF To Adopt The Uttar Pradesh Model To Stop Pandemic
You May Be A Walking Antenna - The Secret Materials Inside YouCovid Clusterfuck And The Schodinger CatProof Of SAR-Cov-2 Engineered At Wuhan Lab And Singapore May Be InvolvedFDA Approved Pfizer Vaccine For Covid-19 -  Did Science Cave-in To Politics?

Email ThisBlogThis!Share to TwitterShare to FacebookShare to Pinterest
Singapore Singapore